A couple of friends and I rode the ferry from Niigata to Sado Island this past weekend to participate in the Sado Long Ride event. We were thrilled to find that the ferry had a game room and in the game room they had this old Famicom Box system up and running! 100 yen for 10 minutes of play with 15 games to choose from. Chad and I had a Duck Hunt competition and then switched off one opponent each while playing Mike Tyson's Punch Out! Haven't played that game in ages but I remembered a few moves and it all started coming back. We were on a roll until we got to King Hippo who is one tricky dude.


Also recently ran across a couple of old video game pin buttons. One for Mach Rider on the Famicom System, and the other for Wagyan developed by Namco. I'd love to find more of these types of pin buttons! 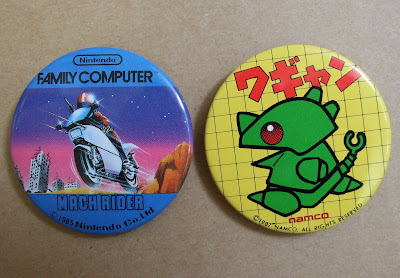