Konnichiwa minnasama! It has been a busy couple of weeks as usual for the squid! Lots to report so let's get to it. First off, Goodsquid is finally on Twitter! Was very reluctant to join it as I don't like the idea short messages going out bothering everyone, but the I realized that the squid needs to get with the times. Feel free to follow me if you want.

Been delving into the world of LaserActive recently with some game titles and some systems as well. What I have found twice is that these old CLD-A100 and NEC-PC1 systems did not spin the laserdiscs. Somewhere on the web I was reading about laserdisc player repair and it was mentioned on a message board somewhere that the laserdisc spindles sometimes 'freeze' after not being used for a long time. Since there was nothing to lose I decided to try to open the machine up and see if I could fix one. Opened up the cover and unscrewed some other components inside the machine which revealed the motor, spindle, lens, and some other components. There were some plastic gears, latches, and springs in there as well. I manually spun the spindle and tinkered with all the moving parts that I could see. Took the tray out, cleaned it off, and put it back in. Well something worked because after that the discs would spin on their own after pressing 'play'. It worked so well that I decided to get a second system and try it again. The second machine had the same problem of not being able to spin the discs, but the refurbishing process went well with that one too! 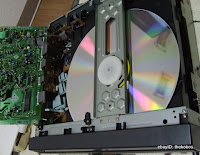 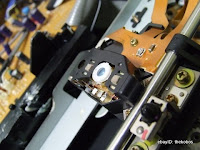 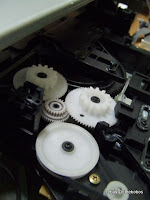 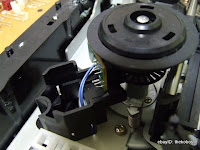 Was able to find some games for the LaserActive as well:


Also in stock is a bunch of vintage video game stuff including Nintendo Famicom's Gyro Robot.

And of course this week's laserdisc offerings: